The Lowry, Salford and The Pitmen Painters 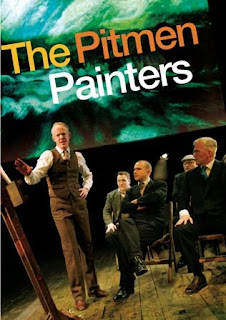 Off to The Lowry in Salford Quays, Manchester, at the weekend to see a production of The Pitmen Painters.
Written by Lee Hall, he of Billy Elliott fame, it is based on the true story of a group of miners from Ashington, who, inspired by a WEA lecture, took up painting themselves and became a feted artistic group.
It was a good production, funny, poignant, moving at times and definitely worth seeing. Hall has great fun with the language of the miners and the confusion it causes to their tutor. One memorable line to the bemused tutor being: "Ye dee dee ort deen't ye?" Trans: "You do do art, don't you?"
And when the brass band started playing Gresford - The Miners' Hymn commemorating the disaster that still resonates in Wrexham, you'd have to be an unfeeling soul not to get a lump in your throat.
But then came the touch that for me detracted very slightly from a great play. As the play finished the slides that had shown us the miners' works of art, turned to text, informing us that their hopes of a "University of Ashington' had not been realised. Their pit had closed in the early '80s, and that Labour had abandoned its commitment to workers' ownership of the means of production.
It was just a bit clunky, a bit like a great big hammer blow of political pointmaking, when so much had been concealed before in the story itself.
I don't need a subtitle at the end of the play to tell me the socialist miners of the 1930s and '40s might feel betrayed by the way the Labour movement has abandoned its principles.
I'm slightly suspicious of plays, films or books which tell a story and then rather clumsily say: "Right, here's the moral and here's how you should think about it." Let people decide for themselves having seen it.
Having said all that, it was still a great production and worth catching on its UK tour. It's on at Sheffield's Crucible this week.
Posted by Banksy at 12:55 am

Saw the PP at the Theatre Royal and share your views about the Uni bit. My mother - presumably wishing I could one day match my namesake's writing skill, fame and bank balance - always buys me tickets to see his work. You should see the faces drop at school reunions when I reveal that I'm not the Lee Hall who wrote Billy Elliot, but merely a journalist...