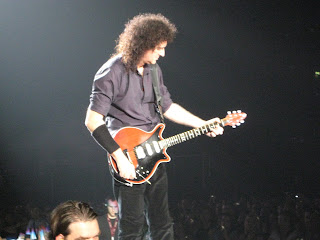 Twenty-five years ago almost to the month I started at Liverpool Poly (as was) as a law student.
I remember travelling in with one of my fellow students one day in those first weeks. He was Wirral-posh and clearly disappointed not to have been snapped up by Oxbridge, forcing him to slum it at the Poly.
"What do you think of Liverpool," he inquired.
"S'alright," I replied, it was early, I was a student, conversation was not high on my priorities.
"D'you not think it's a bit.....grotty?" he asked.
Hard to convey his tone, but it was heavy with contempt for a city that even it's most ardent supporters would admit had seen better days. These were after all the early '80s, the days of the Militant Tendency. Soon we were to see a miner on every street corner with a bucket urging us to support them.
Liverpool was grotty, but it had character and you wouldn't mistake it for anywhere else.
I was back in Liverpool at the weekend for a Queen (+Paul Rogers) concert, which tells much about my age and musical taste. The place has changed.
The grime has been sand-blasted away from the Capital of Culture. Everywhere sparkles and every last corner has been filled with public art or fountains.
The city centre is packed with shiny new stores, and there lies my problem with the place. The shops and stripped wood bars have nothing about Liverpool in their character. You could be anywhere. This is not just true of Liverpool of course, every city centre is going the same way.
It's hard to argue against change when a place is so run down, but it's also sad when improvement involves the homogenisation of our cities.
The concert was great, but I watch Queen with mixed feelings following the death of Freddie. I saw them for the first time at the Liverpool Empire in 1979 on the 'Crazy Tour' (so-called because when they could fill stadia it was crazy to play a series of small venues as they did). That was a great night and hard for them ever to measure up without Fred fronting them.
As one tout outside the Echo Arena put it when he could not sell any tickets: "Dey're nottin' widout Meerrrcury."
Picture courtesy me old mate Chris, who was there in '79 and there again last week.
Posted by Banksy at 8:59 pm No comments: